When the very first vinyl sign was produced is a matter of debate, However, by 1939 road signs had started to appear in America, but unfortunately the adhesive structure was such that they were not sufficiently durable to withstand the inclement weather in North America, the overlay film that was used to protect these reflective short term traffic signs was of more interest, as this was made of VINYL, a product that had been “Accidentally” discovered in 1929 by the B F Goodrich Company and refined from the original Vinyl Chloride.By the late 1940’s technological advancements were made and CAST VINYL film with pressure sensitive adhesives were being produced and then by 1956 SELF ADHESIVE VINYL FILM  was being produced on an “”Easy peel” silicone release liner, the main use for this product had been bumper stickers and fun promotional products which were largely being driven by the Automotive industry. The All American “Woody” station wagons first introduced in the 1950’s had been redesigned by the early 1970’s and a wood grain effect vinyl was being used by the four major car builders in the USA as we can see below 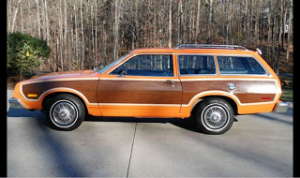 the FORD PINTO with wood effect vinyl, this was mainly manufactured by 3M under the brand name “Di-Noc” this is still available in a vast array of colours, shades and textures from The Vinyl Corporation mainly for  restyling interiors of offices and Architectural finishes.

By 1980 the production of CAST VINYL in the USA by 3M,Arlon and FASSON was improving in quality and quantity output, making a viable option for fleet advertising and the European market with MACTAC , FASSON ,  Ultramark and RITRAMA were satisfying the growing demand for the more economically positioned calendared vinyl . In the early’80’s some progressive transport managers were seeing the value in reduced downtime, better resale value and reliability to employ VINYL SIGNS rather than the hand painted signs that had been traditionally used, some of the early examples of these progressive vehicle liveries were

and the iconic YORKIE LORRY 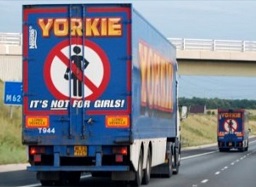 At this stage of development there were Screen printers making large runs of vinyl decals and liveries  and then came the personal computers so a much smaller computer aided design machine could cut the vinyl lettering, making smaller production runs possible and more affordable, Enter the GERBER 4B

and this was followed by the

The quality and uniformity of the POLYMERIC VINYL production was advancing well and throughout the UK the demand was turning away from the expensive 3M and ARLON CAST VINYL  more to the quality ploymeric films from MACTAC 9800 series, Ultramark 5000 , TVC 527 and the ORACAL range of vinyl which performed very well through this new range of small plotters, so the VINYL SIGN MAKING market was being powered ahead again largely by the Automotive industry and the power of retail advertising was being recognised on these large mobile hoardings travelling up and down the motorways of our country as well as being used on shop fascias, car customisation  and general signage.

KPMF were tasked with the job of providing a vehicle wrap that could be easily applied and then removed after three years to reveal good paintwork and therefore delivering a better residual value than if it had been sprayed and then resprayed after the three years usage, this shade of Beige vinyl is still available today from The Vinyl Corporation along with the market leading wrapping vinyl films from AVERY DENISSON  and ORACAL 970 RA . in 1996 Micro Replicated Air Channels (MRAC) was developed to make easier applications of large Vinyl Graphics without bubbles.

In the meantime the printing industry was developing safer inks, faster digital printers with solvent, eco solvent, UV and LATEX technology to print onto standard, non coated vinyl, which will be dealt with in the next series of historically based blogs, for any further information please call the dedicated helpdesk on 0115 930 1133 and ALL the above mentioned quality vinyl products are available from The Vinyl Corporation.